Battle of the Facial Moisturizers! CeraVe vs. Philosophy 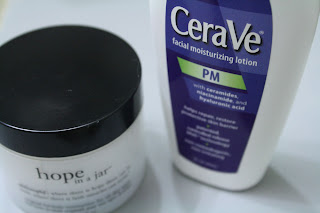 A few weeks ago, I was on the verge of running out of one of my beauty staples: Philosophy's Hope in a Jar. It takes a lot to find a moisturizer that works with your skin type, especially when, like mine, your skin is prone to breakouts and other misbehaviors. (Sorry, skin. I know it's my fault somehow. If only you could speak, I'd fix whatever's wrong before it could get to you! But because you can't tell me what's up, I have to figure it out through trial and error.) Anyway, Hope in a Jar has been my miracle product ever since I discovered it a few years ago, so I get kind of antsy when the jar is almost empty. Usually, I restock well before I run out.

But not this time.

I don't know what was different a few weeks ago. Maybe I was just feeling adventurous. Maybe I've decided to be paranoid about parabens again. Maybe I just felt like trying to find out if I could get awesome results for less than $13.75 an ounce (or $30 an ounce if you use the price of the smallest jar o' hope). Whyever it was, instead of running out for another familiar little white jar, I went looking for an alternative. And that's how I came across this post from Her Campus: I can't believe it's not from Sephora: Top 5 drug store substitutes for your favorite high end products.

The very first thing on the list is Philosophy's Hope in a Jar. The suggested substitute is CeraVe Facial Moisturizing Lotion PM. I'd never heard of CeraVe before — can you tell I don't do a lot of drug store makeup shopping these days? (I think I met and surpassed my whole life's drug store makeup quota when I was a teenager.) Like Hope in a Jar, the CeraVe lotion does contain parabens, but for the price, it seems worth a shot. So with a trip to my local Walgreens and $13.49 ($4.50 an ounce!) spent, my first beauty product battle is on!

It's been 10 days since I started using the CeraVe instead of my beloved Hope in a Jar. There was a definite, immediate, not-so-awesome difference in my skin, so I can't say the products work exactly the same way. They have different ingredients, though, so no shock there. While the Her Campus reviewer said the CeraVe actually outperformed(!) Hope in a Jar for her, so far it hasn't done that for me. When I use Hope in a Jar, I can keep up terrible sleeping habits and still wake up looking like I've had some sleep. (I know ... I shouldn't do that, but if the world were perfect, I wouldn't need Hope in a Jar to begin with!) If I don't get enough sleep while using the CeraVe, though, it shows in my skin texture. Although the two products both absorb quickly and I only need to use a little bit of each, the CeraVe doesn't immediately make my skin feel soft and refreshed, unlike Hope in a Jar. The most I can say is that it moisturizes right away. With the CeraVe, I'm also waking up with way more whiteheads, way more often, than I was with Hope in a Jar.

So ... so far, the products don't compare to each other at all, for me. However, I'm going to stick it out with the CeraVe Facial Moisturizing Lotion PM until I run out, just to give it a fair trial and give my skin a chance to adjust to the new routine. Maybe after a whole bottle's worth I'll feel like the switch was worth it, after all — or maybe not. I'll check in again in another couple of weeks and let you know how things are going!