Looks like orange nail polish is The Thing around my house lately. This time, I also tried my first glitter shatter polish. Intelligently, I chose an orange-y sparkle to go over orange polish, thinking it might be kind of Halloween-y ... and the result is that you can barely see the shatter effect, except as a freaky uneven texture. (OK, weird textures are kind of Halloween-y in themselves, but not quite what I was going for.)

You're probably thinking, "Duh. What did you think was going to happen if you put orange on orange?" but on the off chance you're not, then hey! Learn from my mistakes. ;) 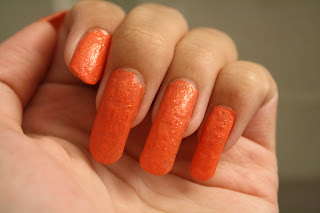 Of course, the funky shatter polish texture is also preventing me from being able to tell whether there's any bubbling going on with the Sally Hansen Diamond Strength Diamond Shine top coat (which I mentioned fighting with in my last post). Hopefully the third time I try this top coat will be the charm. I may go plain old purple with my next polish adventure, so that the top coat will be able to shine, or not, as the case may be!

These are the two polishes I used:

The Julep polish is kind of a saturated medium melon color with a crème finish. It's the first Julep polish I've tried, and the texture is very thick and creamy. I actually had trouble applying it evenly, since my ancient memories of nail polish usually involve much more liquidy polishes. I'm kind of iffy on the way the color interacts with my olivey skin tone — it's a rather cool-toned orange that I think clashes with my skin slightly.

The Sephora shatter polish is glitter in a transparent polish base. Also, despite the name, to me it's definitely more copper than gold, and it seems like it's all the same color of glittery, not opalescent at all. (Maybe the opalescence is supposed to be in the clear part?) I thought the copper might go well over the melon-y orange and enhance it, but really, the sparkle blends into the base color quite a bit, so (as I mentioned above) the shatter polish becomes more about the surface texture than the sparkly color. There's another shade of this shatter polish called Blasted Gold that looks more like a true gold, or even a little on the cool side for a gold, that might make a better contrast against the orange. (Or maybe it wouldn't. Anyone tried it?)

These two polishes, methinks, are not really an award-winning color combination, but on the other hand, it's not so bad that I broke out the nail polish remover right away, either. So it's not quite a beauty fail. It's just ... tolerably mediocre, a necessary lesson on the road to awesomeness. And that's all I have to say about that!

Email ThisBlogThis!Share to TwitterShare to FacebookShare to Pinterest
Labels: nails